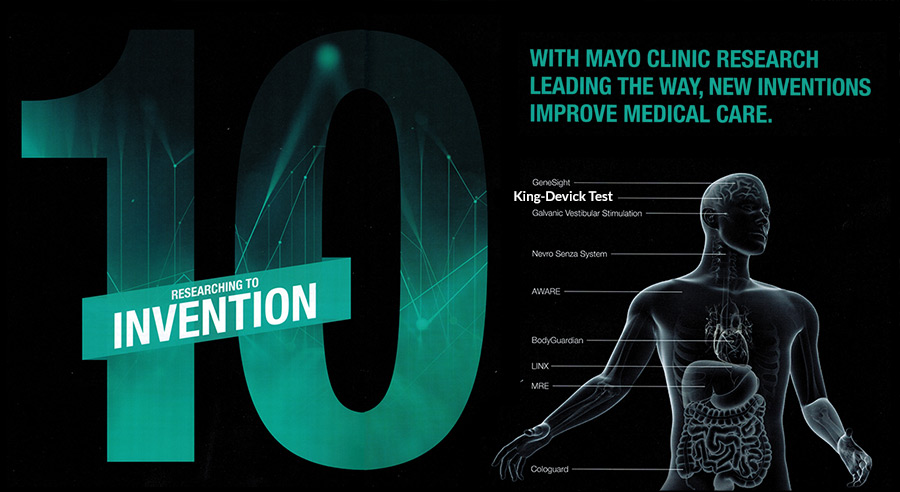 Over its 150 years of operation, Mayo Clinic has contributed heartily to the practice of medicine, medical research and the education of future health care professionals. The most pervasive may be showcasing the integrated, multispecialty group practice called the Mayo Model of Care.

The most obvious may be the Nobel Prize for discovering cortisol.

But the most recent show Mayo Clinic’s response to the changing medical ecosystem. Improving devices, capitalizing on digital opportunities and addressing unmet patient needs have led to exciting contributions to health care. Here are just 10 brought to you in part by Mayo Clinic Ventures and business collaborators.

10. A QUICK READ ON THE BRAIN:
King-Devick Test in assoication with the Mayo Clinic
Concussions, and what they mean for the brain in the long run, are of great concern to athletes and their families. Young athletes, who are especially at risk, take longer to recover, according to experts at Mayo... When the athlete is suspected of a concussion, the test, called the King-Devick test, is administered again, and the results are compared. In the case of brain injury, the athlete will read the numbers at a slower pace than his or her baseline time.

1. A SCAN THAT FEELS YOU:
magnetic resonance elastography
A host of imaging technologies can tell you if something looks abnormal, but they don’t give physicians information on the health of the tissue. While many diseases cause scarring and damage to organs or tissues, examining the extent of the damage often required invasive biopsies or surgery. To provide a more comfortable and less expensive alternative, physicians and researchers at Mayo invented a new way to examine tissue flexibility called magnetic resonance elastography. This is an imaging technique where a paddlelike device emits low frequency vibrations aimed at targeted tissue. The vibrations travel through the tissue at different rates, depending on the tissue’s characteristics. The technique can assess the level of fibrosis in the liver or provide more information prior to brain surgery.

2. EMERGENCY MEDICAL RECORDS STAT:
Ambient Warning and Response Evaluation
When you’re in the intensive care unit, health care providers are gathering information as quickly as possible to make the right decisions faster. But sifting through all that information can take time. To streamline that effort, Mayo physicians and scientists have developed a software interface that highlights the most immediately important information. The software, called Ambient Warning and Response Evaluation (AWARE), reduces the time it takes health care providers to make decisions as well as the number of medical errors that can take place in such a fast-paced situation.

3. SENSING THE BEAT:
BodyGuardian
A steady heartbeat is a given for most. But for those who manage heart failure, the occasional irregular heartbeat can be unnerving — in addition to the chest pain, dizziness or lightheadedness that comes with it. In those cases, a little extra monitoring can bring a whole lot of relief. To improve care for these patients, Mayo Clinic clinicians and bioengineers worked together to identify a way to remotely monitor heart rhythm all day, every day. In collaboration with experts in information technology, they came up with BodyGuardian, launched in 2015. The square heart monitor snaps onto a plastic strip embedded with electrodes. A dedicated smartphone, sent to patients with the monitor, receives data and transmits it to a server. With this device, patients can be monitored as if they were in the hospital while they enjoy their daily activities.

4. PEACE OF MIND WITHOUT THE PREP:
Cologuard
Colon cancer can start as small clumps of cells in the large intestine. Since these cells, called polyps, produce few symptoms, it’s hard to catch them. That what makes colon cancer screening, called a colonoscopy, so important. But colonoscopies require a time commitment that some of us won’t or can’t make. Preparing for a colonoscopy includes dietary changes and a process to clean out the colon as much as possible. When added to the time it takes for the procedure itself, many people just choose to put off the test. So Mayo Clinic researchers developed another option. Like all cells
in the colon, polyps replace old cells with new ones. The old cells from the colon (and any polyps) are then carried out of the body in human waste, or stool. By testing the stool for DNA specific to cancer and blood cells, Cologuard can provide an assessment
of your colon cancer risk.

5. GREEN-LIGHTING HELP WITH MENTAL HEALTH:
GeneSight
When we need help with mental health, we want it fast. But patients looking to treat depression, post-traumatic stress or schizophrenia must often try multiple medications and dosages before finding what works. To help get the right drug in the right amount as soon as possible, Mayo Clinic physician-scientists began investigating the role genes play in that process. Genes provide instructions for making proteins, and proteins do things, such as break down drugs or help transport substances, such as the neurotransmitter serotonin. The researchers chose five genes and drug targets, which, taken together, offer thousands of variations to treatment. A patient collects cheek cells, and the sample is examined through GeneSight to see which version of the targeted genes the patient has and how his or her configuration interacts with drugs available for the condition. The results of the test — labeled red, yellow or green — clarify which drug is likely to work better. Therefore, patients get back to their regular life faster.

6. ZAPPING CHRONIC PAIN AWAY:
Nevro Senza system
Pain that persists after surgery and other efforts is common among older American adults, according to researchers. For many, it can be a daily struggle and slog from one treatment to the next. One possible treatment for that pain — one that doesn’t rely on opioids — is direct stimulation of the spinal cord. A team of Mayo Clinic physician-scientists helped develop one such device, which is sold now as the Nevro Senza system. For patients with hard-to-manage chronic pain, various frequencies of electrical stimulation can be delivered to the spinal cord. These bursts interfere with the pain signals from nerves to varying degrees. Patients work with a controller to set the frequency based on what they’re experiencing.

7. RESTORING BALANCE:
galvanic vestibular stimulation
Within our ears lies a complex mechanism for sensing the head’s position. Called the vestibular system, it senses how the head is moving and continuously communicates that information to the brain’s neurons. Merged with reports from our eyes and sensory nerves, all these data keep us balanced, literally. But, in some cases, such as in simulations or virtual reality, the system breaks down. The resulting symptoms of motion sickness can diminish quality of life and, in the case of pilots, one’s ability to perform. To solve this problem, Mayo Clinic’s Aerospace Medicine and Vestibular Research laboratory team in Arizona developed galvanic vestibular stimulation. It works like this: Four electrodes are placed on the head. They send bursts of electrical currents to the inner ear, matching the movement the eyes see. That makes the brain’s neurons think the body is moving. Patented by Mayo and licensed to vMocion, this tool may steady us physically by synchronizing the inner ear system responsible for balance and the report from our eyes.

8. QUENCHING THE REFLUX RING OF FIRE:
Linx
Stomach fluid that creeps up, and into the esophagus causes discomfort and irritation for millions. If it happens often enough, it’s called gastroesophageal reflux disease or GERD. And it’s the first step down a path that can include esophageal damage and a precancerous condition called Barrett’s esophagus. Stomach acid is usually blocked from the esophagus by a band of muscles. The muscles hold the esophagus shut until pressure pushes it open. But if that band loosens, stomach acid can splash into the esophagus. To mimic the action of those muscles in people with GERD, Mayo Clinic physicians and scientists helped develop a band of magnetic beads. The device, called Linx, is about the diameter of a quarter (about 1 inch or 2.5 centimeters). Each magnetic bead rests on its neighbor but has the capacity to expand — allowing food and drink down, or air (belch) and vomit to come up.

10. A QUICK READ ON THE BRAIN:
King-Devick Test in assoication with the Mayo Clinic
Concussions, and what they mean for the brain in the long run, are of great concern to athletes and their families. Young athletes, who are especially at risk, take longer to recover, according to experts at Mayo. To assess athletes for concussions, Mayo Clinic researchers helped validate a universal, simple test for when a player’s brain has been injured. The test is simple and fast. The athlete reads a series of numbers as fast as he or she can. It seems simple, but the test requires a combination of eye movements, speech, language and concentration — all of which can be impaired by a concussion. Baseline scores are assessed prior to play. When the athlete is suspected of a concussion, the test, called the King-Devick test, is administered again, and the results are compared. In the case of brain injury, the athlete will read the numbers at a slower pace than his or her baseline time.